The Weber Summit Charcoal Grill (Grilling Center) is a Kamado!

I’ve owned a lot of kamados including the Komodo Kamado, several Big Green Eggs, Kamado Joe (both the Kamado Joe Big Joe and the Kamado Joe Classic) as well as metal kamados like Akorn Kamado by Chargriller and the Bubba Keg (previously known as Big Steel Keg and now known as the Broil King Keg). They are all great products, by the way, and if you are thinking about getting one, I don’t think you could go wrong with any of them. However, they all have different strengths and weaknesses.

Since making this video, I have actually fired up the Weber Summit Charcoal grill and done a test run. I was expecting the Summit to operate like the metal kamados I have owned before but it didn’t. The Keg and the Akorn are much more efficient but the flip side of that is maintaining temps is not as simple.

However, the Summit felt a lot more like the Big Green Egg XL and Kamado Joe Big Joe. It ran a little hot like all grills do when they are brand new because the vents are not seasoned up, but once the grill settle in, it stayed pretty much where I put it. Also, the heat coming off the grill when you touched it felt more like a ceramic grill than a metal one (meaning, it felt hotter…metal kamados have insulation like an indoor oven.)

Now that was just one test run and there was no wind that day, so we will have to see how it does in future cooks, but it was encouraging to see for the first cook.

Links to Amazon
If you are interested in purchasing any of the products mentioned in this video (and you feel like being awesome) please use these links and Amazon will send me a small referral fee. I’m hoping it’s a monkey…but it’s probably just regular money. But have you ever noticed how close the spelling is between “money” and “monkey”? …just drop in a ‘k’ and money becomes a monkey. However, whether it’s a monkey or normal money, the price of your item is the same as it would be if you arrived at Amazon linklessly. (Is that even a word?)

And another thing, you actually do not even need to buy any of the specific products I’ve linked to. You could actually buy ANYTHING…like socks or something weird. They will still send me a referral fee (or monkey) since you used one of these links to get there. Now just to be clear, it’s not a lot of money… unless you buy REALLY nice socks. (Which you should. Your feet deserve it.) They take you pretty much everywhere you want to go. Except for when you are in your car, of course. You know what you should buy after clicking these links?!? A CAR!?!? Now that would REALLY help my channel.

By the way, I used to hate it when YouTubers say “help my channel” because I was pretty sure what they really meant was “Cha-Ching, baby!” But the truth is it’s not that much money. But video equipment is expensive and every little bit helps. So get out there and BUY THAT CAR!…if they even sell cars. If not, buy those fancy socks. Your feet with thank you…and so do I!

If you’ve actually read this far, let me know in the comments because I’m pretty sure most people’s eyes glaze over after they saw the “Links to Amazon” phrase.

OK, so here are the links

The Summit Grill does not appear to be on Amazon yet. 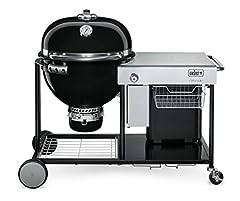 Experience the evolution of the iconic Kettle where charcoal grilling meets low &-slow smoking. With a push of a button, coals are lit & the smell of barbecue will soon embrace the neighborhood. Whether smoking, grilling, or even baki... (as of February 18, 2020 - More infoProduct prices and availability are accurate as of the date/time indicated and are subject to change. Any price and availability information displayed on [relevant Amazon Site(s), as applicable] at the time of purchase will apply to the purchase of this product.)

I like watching your videos a lot. You tested the new chargrill kamando yet

I’m not paying $2K for this shite.
Its the principal of it.

If anyone wants to sell one i’ll buy it though.

That was funny. Yes it is expensive, wife says NO!!!! now I’m sad and mad.

LOL That was FUN!

Won’t it rust over time.

Thanks to your video and my research, I purchased and love cooking on this thing. The ability to change temperature or the consistency for it to stay the same is amazing. Honestly for what we got its priced appropriately.

Justin,
I could not tell from the vid but how many stitches did you get from your assembly injury?

What’s with all the dislikes? This was great!

Love it. Thraping wallets in USA like they thrape us in the Old Dart.

Nice video. So when you use the kamado instead of your weber? They both seem very expensive.

Nice video.  I wish I had that amount of energy & patience to do all of that outlining, staging, and editing on my videos. LOL

Hi, can you get me a tip? I’m using a Weber WSM Smoker a Weber 57cm Kettle and an Weber Genesis Gas Grill and now I’m looking for an Kamado. What do you think is the best option a Weber summit Charcoal or an Big Green Egg? Thank you for your answer and best greetings from Switzerland Mark

Brilliantly put. I will now look for a Komado to go along with my Masterbuilt Electric Smoker.

This guy tries way too hard to be funny, I lost too many brain cells I had to stop watching by the 2 minute mark.

Your videos are very informative and fun to watch. Looks like your whole family is involved too! Do you think a Weber 26 inch kettle (with some accessories) could compare to this beast for most smokes? For as impressive as it looks and performs in your videos, I can’t justify paying that price.

So is it a kamettle? Kettlelado? – Can’t take credit, taken from amazingribs.com when looking at the review hehe.

New Sub, Great video! I have a Weber Summit 640 that’s 15 years old and still looks and runs great. I love Weber, and I had been looking at a performer to add to the stable. After seeing this launch I am considering one over the performer. I agree the price is high, but they last and just work, so they justify themselves. I was hoping it would have been a pellet grill, as that would have been something new for Weber, but a Kamado style is something I have never had or used, and I have looked at the BGE and others including the Komodo brand or as I call them “Pieces of Art”… 🙂 with curiosity.

Great info on the Summit. Subscribed.

Excellent review. You have convinced me to stay with my performer and pick-up a smokey mountain cooker.

An OK review.
I agree the way they marketed it was off.
That, the price and the extra grate were the only things you nailed spot on.
Kamado’s don’t need a water bowl. I don’t know about the summit, but I’ve never had to add a water bowl in my egg and I’ve yet to have any dry BBQ.
You also don’t need to access the fuel because they run much more efficiently than any of the other grills/smokers.
It has more pro’s than con’s IMO.
There’s things you can do with a Kamado that you can’t with the comparison Weber’s an vice versa.
If I didn’t already have a BGE or if something happens to it, I’d probable pull the trigger on one.

Whats up my nigga. Wow, that video was kind of all over the place. Anyway, if this does not have ceramic top and walls, its not a Kamado.

That was fun Justin.

hahah funny.. luv it… its does make sence…

One of the best directed channels on YouTube. Dude you rock, keep BBQing and we’ll follow. P.S. ITS A KAMADO!

I kind of wanted to poo poo this video but fuck no mate. The meat of this review is really useful and interesting.

Oh and you’re not Weberfied, I take that back………..

Stop trying to be Casey Neistat tho, u dont need it fella. Stick to the honesty. It’s the best policy……

Just subcribed to your channel. Very funny and creative but need more videos!! =)

Very funny!! And very logical. I sell this grill at my hardware store and the price is very difficult to get over for customers. Haven’t sold one since they’ve been released.

Plano Texas in the house

Weber has always overpriced their grills …and I happily buy them